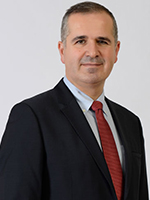 Cenk Alper received his BSc and MSc degrees in mechanical engineering at Middle East Technical University, in 1991 and 1994 respectively and completed his MBA at Sabancı University in 2002. Starting his career as Process Engineer at Beksa in 1996, he worked Bekaert’ overseas organizations at different managerial positions between 2000 and 2007. Mr. Alper, who joined Kordsa in 2007, worked as Global Technology Director, Vice President of Technology and Market Development and Vice President in charge of operations. On June 17th 2013, he was appointed as the CEO of Kordsa. Mr. Alper was appointed as the Industry President on April 1st 2017.